By Thomas B. Cross @techtionary

Facebook DCGANS Knowing What You Are Going Todo Next

Facebook is amping up the AI game with serious development into generative adversarial networks or GAN which is using machine intelligence to gain observational intelligence about the world.
Facebook writes “generative adversarial networks (GANs) were previously thought to be unstable. Sometimes the generator never started learning or producing what we would perceive to be good generations. At Facebook AI Research (FAIR), we’ve published a set of papers on stabilizing adversarial networks in collaboration with our partners, starting with image generators using Laplacian Adversarial Networks (LAPGAN) and Deep Convolutional Generative Adversarial Networks (DCGAN), and continuing into the more complex endeavor of video generation using Adversarial Gradient Difference Loss Predictors (AGDL). Regardless of what kinds of images or videos we gave to these systems, they would start learning and predict plausible scenarios of the world. Humans learn by observing and experiencing the physical world. We can imagine a not-too-distant future where a complete artificial intelligence system is capable of not only text and image recognition but also higher-order functions like reasoning, prediction, and planning, rivaling the way humans think and behave. For machines to have this type of common sense, they need an internal model of how the world works, which requires the ability to predict. What we’re missing is the ability for a machine to build such a model itself without requiring a huge amount of effort by humans to train it.”
They now focus their efforts on DC or deep convolutional or DCGANS “to identify patterns and put similar representations together in some dimension space. In the faces data set, for example, the generator doesn’t understand what smiling means, but it finds similarities in images of smiling people and groups them together. Building on similar work that has been done with text, we investigated whether simple arithmetic reveals rich relationships in this space. We found that averaging three exemplars produced consistent and stable generations that semantically obeyed the arithmetic.” Click on image for complete article 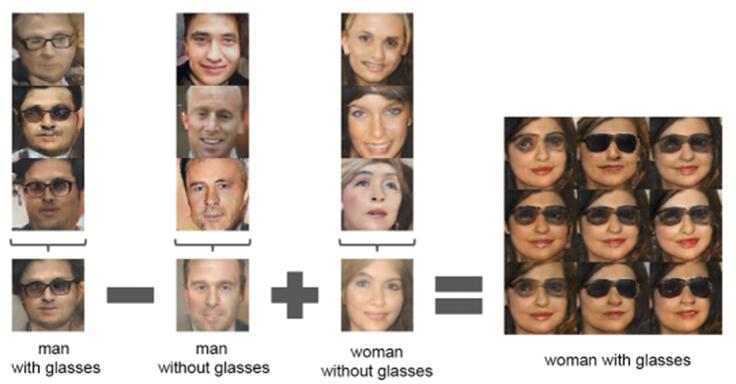 Bottom-line –  Facebook goal has been proven to be nefarious and troubling as they use their platform to suck you in.  Indeed they say “Ultimately, this type of knowledge could help further accelerate the development of applications including advanced chat bots and virtual assistants.”  GANS or DCGANS are disconcerting, however, if they could tell if a person is about to commit suicide, shoot their fellow students or some other harm to another, then maybe they have value.  All tou often, however, this technology ends up being used to harm they very people it portends to help.

If you are interested in AI or social selling applications, submit your news or solutions below: